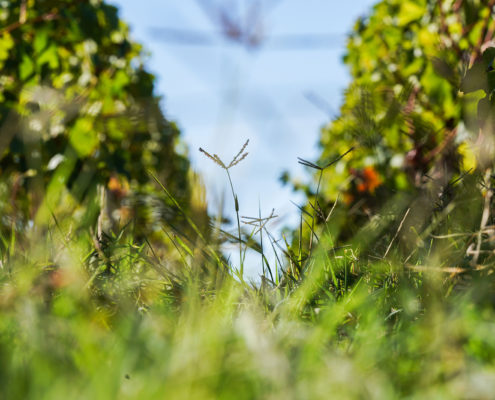 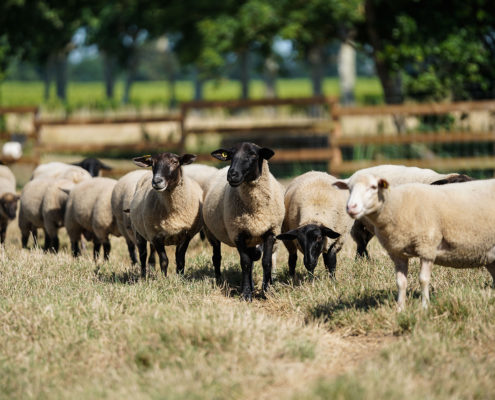 In 2019, Château Montrose is reconnecting with its eco-pastoral past and preparing its vineyard for conversion to 100% organic. Two measures among others that form part of a global environmental strategy planned until 2026.
Overview of an ambitious programme, looking resolutely to the future…

Following its takeover 12 years ago by Martin and Olivier Bouygues, both strongly committed to a sustainable development approach within their Group, Château Montrose has launched an action plan, a truly deep and global change, analysing the entire estate in detail to achieve its 2019 goal: to limit the impact of its activity on the environment, capitalise on its ecosystems to protect the terroir in a lasting way and create the optimal conditions for conversion of its vineyard to 100% organic.

The hidden face of Montrose: 35 hectares of green areas
Beyond the 95 hectares of vineyard land that are the château’s wealth, the commitment to a global environmental strategy has revealed the hidden face of Montrose: 35 hectares of green areas, consisting of old forests, thickets, hedges, meadows, grassed strips, natural copses, fallow land, rush plantations, etc. Five kms of permanent and temporary streams, as well as two ponds.
Château Montrose has carried out an “audit” of these natural areas, which constitute resources and habitats for wild fauna and flora: 31 bird species, including protected species such as the Bullfinch or Goldfinch, 21 species of butterflies, 3 of them migratory, and many mammals, including European otters and Roe deer, have been identified.
In 2017 and 2018, more than 1 km of hedgerow on the north-south axis of the property and 450 species of vegetation were planted. These good practices greatly improve biodiversity on the estate.

A flock of sheep,
new helpers in the Montrose vineyard
Beyond the new practices in favour of biodiversity, aimed at preserving the wild fauna and flora, Montrose is encouraging recolonisation with native species. Reconnecting with the tradition of eco-pastoralism that was in the estate’s DNA, Montrose recently welcomed a flock of 30 ewes and a ram. This herd, whose job is to maintain natural areas in complete autonomy (weed management and natural weeding), moves according to the seasons and maintenance needs to the natural forage sources available: fallow land, woods and undergrowth, and then the vineyard in winter. This transhumant herd also improves soil enrichment.

Ancillary crops,
to develop biodiversity and improve soil management
Montrose has moved towards a more natural and autonomous way of managing soils by making the most of ecosystems. For example, cereals and tillage radishes, with their strongly restructuring root systems, have been planted to solve soil compaction in “resting” plots.
Montrose will soon be able to make its own produce, with the creation of:
– an orchard planted with varieties from a regional conservatory,
– a permaculture vegetable garden, inspired by the autonomous ecosystem model.

A step ahead,
in supporting the move towards 100% organic and 100% electric
Montrose allocates an annual budget for research and development to optimise best practices in the vineyard and cellar. Understanding and protecting the 100% organic vineyard can be considerably improved through the use of drones, satellite images and robots. As another example, the technical fleet, aimed to be 100% electric by 2018, could soon be equipped with robotics, more efficient batteries and even lighter equipment to further reduce soil compaction and offer better working conditions for the teams.

Mass / clonal selection,
to preserve the Montrose gene pool
As part of its mass / clonal selection process, in 2025 Château Montrose will start multiplication of “selected” Cabernet Sauvignon vines and targeted inter-plot planting using its own specimens. From 2019, a similar approach of mass selection will be initiated on the historic plots of Merlot.

100% recycling with waste recovery, and
the production of 40 tonnes of potassium and sodium bicarbonate
In the vineyard, thanks to the recycling of all the waste from the estate’s vines, cellars and green areas, Montrose applies the saying: “What is in the earth should go back to the earth.”
In the cellar, while Château Montrose practices responsible winemaking by limiting itself to inputs authorised by the Organic specifications and reducing its energy consumption, the estate is going further with the recovery of the CO2 resulting from fermentation. The procedure consists in reacting the CO2 with sodium or potassium carbonate, to produce the bicarbonates. Internally, the potassium bicarbonate produced at Montrose will be used in the vineyard as an anti-rot solution, while sodium bicarbonate will be used in the cellar as a detergent and to inert tanks and barrels. Other external uses of sodium bicarbonate are being explored, in particular to supply the spirulina production market.

AS THE LOCKDOWN IN FRANCE COMES TO AN END, CHÂTEAU MONTROSE FINALLY REVEALS...